Why were the 116th chosen for the first wave of 29ers to hit the beach on D-Day by General Gerhardt? The legend goes that some GI's from the 116th were caught fighting with African American soldiers whilst in England. Gerhardt found out and aparently said something to the effect of "If you want a fight Ill give you a fight!"

The 116th trained at the Assault Training Center along with the 1st Division and many other units. They seem to have followed the guidelines set by the center when it comes to the quipment they carried and the set up of their assault boats with only a few alterations.

This artical is a manifestation of all the photogrpahs we have managed to find over the years that we believe are of the 116th at Weymouth and Portland prior to and during the invasion itself.

The book Spearheading D-Day is a great source for info on the Assault Training Center and is full of 29th related segments including many high quality photographs. 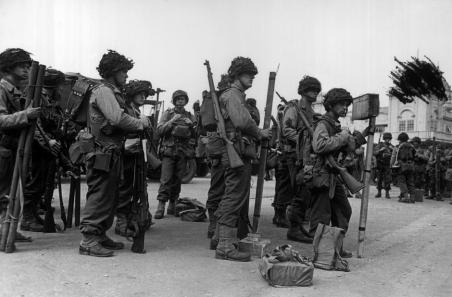 Lets break down some of the images taken of the 116th as they prepared to board the Empire Javelin prior to June 6th.

We are going to look at in extreme detail the men, uniforms and equipment that are shown in the photographs.

Lets start with this one pictured left. It shows GI's waiting at the dock by the old Pavilion in Weymouth. This picture was taken by Robert Capa who boarded APA 26 Samuel Chase with the 1st Division for the invasion who boarded in the same area as the 116th.

Who are they and how can we start to figure it out?

Lets look closer and find out. 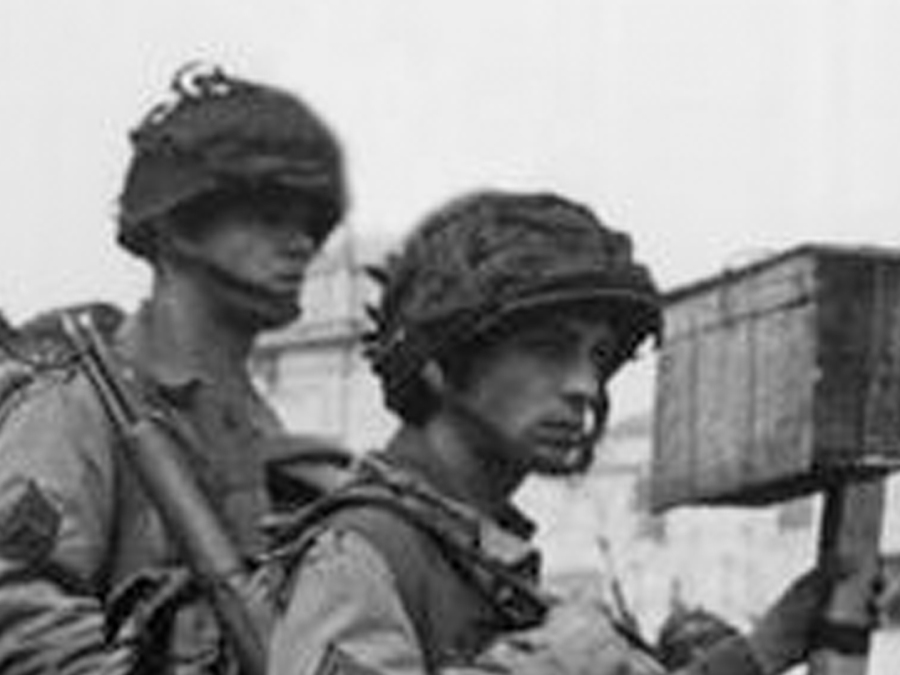 The 29th Division had strict rules on always wearing the helmet chin strap at all times, this is one clue that the men in this photograph are from the 116th.

Scrim was worn by the 116th and 1st Division. 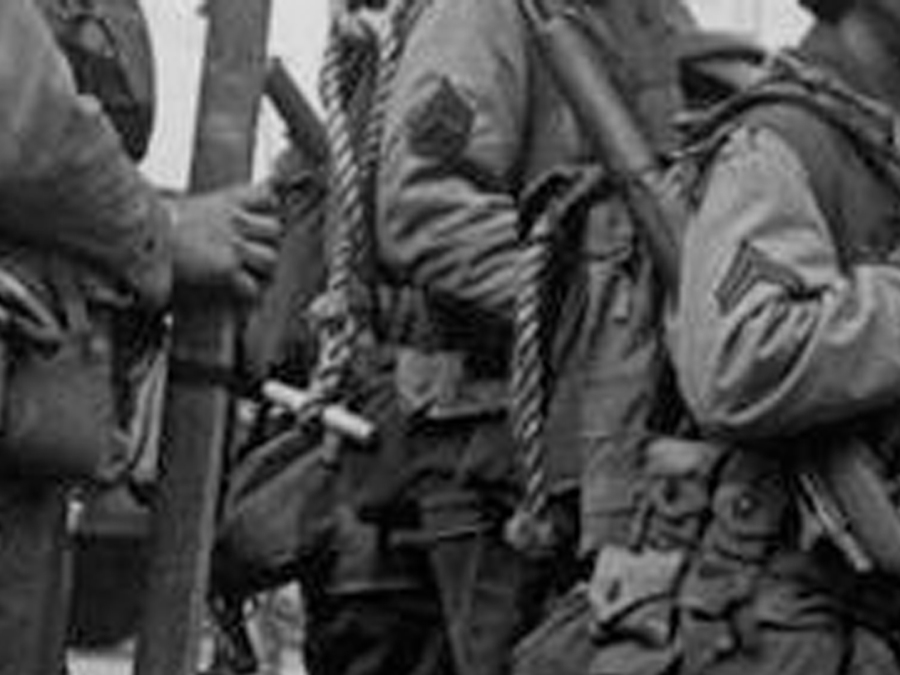 It is noted in the book Spearheading D-Day that the 4th Division used the same british toggle ropes as seen in this image above on D-Day however the book does not mention the 29th or 1st using them. The 4th Division wore HBT uniforms for the landings and loaded onto their ships at Plymouth not Portland. This shows that the ropes were used by the 116th as well on D-Day.

It is interesting to note that the 29th Rangers trained with the same ropes during their activated period. Maybe the idea was passed on by the 29th Ranger men who returned to their units after it was dispanded? We do not know but we know that the ropes are designed to be linked together to make ladders in order to climb obstacles. 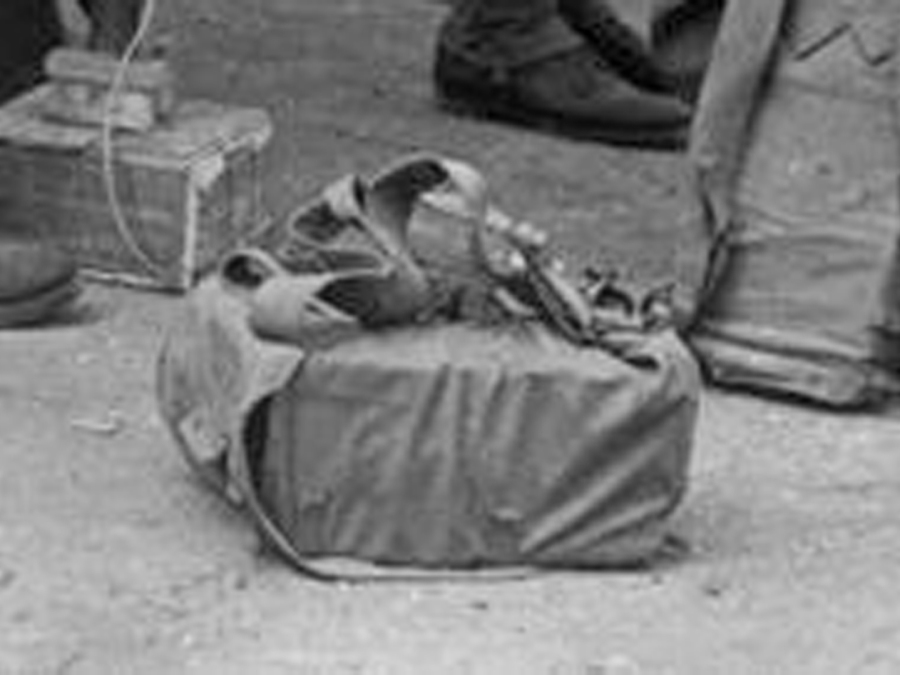 Our best guess as to these very strange looking standard issue haversacks is that inside them is an Assault Training Center pack charge. These charges were TNT blocks taped together with a fuse and are meant to be placed on obsticals to remove them. It looks like these pack charges have been built into haversacks which would make them easier to carry possibly. We do not know and there is no mention of haversacks being standard practice as the original way of making a pack charge is seen being carried by troops in other pictures.

The 2nd Rangers were due to land at H hour like the 1st and 2nd btn 116th. Most of the footage and images we have of the Rangers are the 5th Rangers.

From what we can see from the Ranger photos and footage is that they mostly did not wear helmet nets on D-Day. Photographs we have do show that some did wear leggings instead of the jump boots. The Rangers also wore impregnated HBT trousers.

The 2nd Rangers would have boarded early in the morning, too dark to take photographs. These images are of the 5th Rangers who were due to land at H+30 on D-Day. There was sufficient light to capture these photos and film. 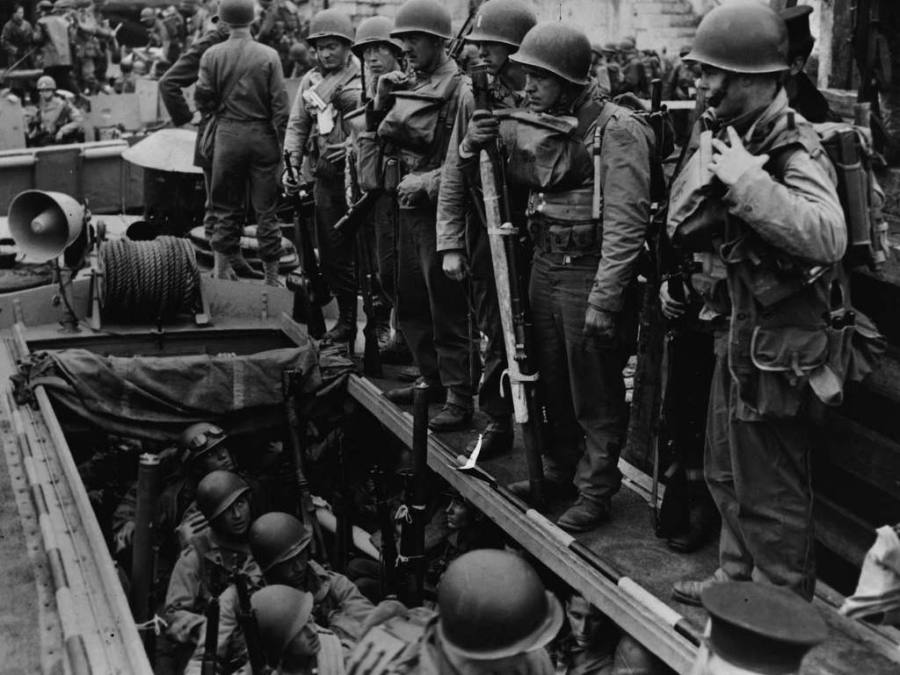 Notice there are no Rangers wearing nets on their hemets, the Ranger shoulder patch clearly visable on the man 2nd from right. 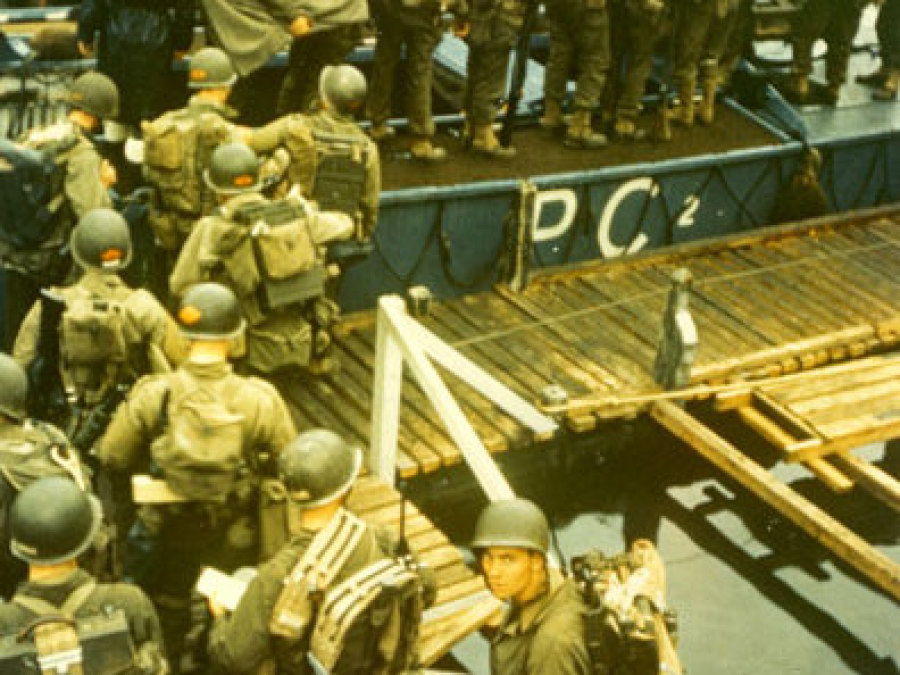 This photo of what looks like a HQ section of the Rangers shows lots of radio men. again no helmet nets visable. 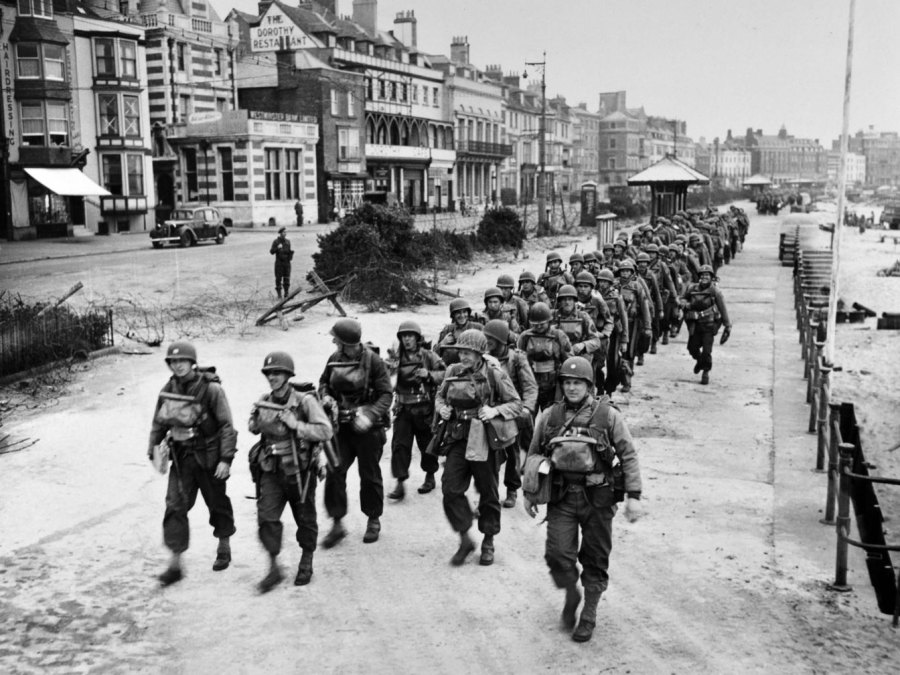 This platoon is not carrying any special assault equipment. Note only a few have their chin straps fastened and only 1 officer has a helmet net.

ARE THEY 1st DIVISION?

The 29th Division was following some of the guidelines that the 1st Division gave them in regards to what they did for the invasion. We know that the reason the 29th wore CC-2 impregnated wool uniforms instead of HBT uniforms is because that order came from the 1st Divison command. The 29th followed the 1st when it came to this order.

The 1st Division's 1st wave men wore scrim in their helmets from what we can tell as the photographs of injured men on the beach mostly seem to support this. Robert Capa was embeded with the HQ of 1st Battalion 16th Infantry of the 1st Division who were meant to land at H+70 minuets. (not first wave)

1st + 2nd Btn 29th Div along with 2nd + 3rd btn 1st Div were to land at H Hour first wave and so were to board first along with the 2nd Rangers.

Lets look at some 1st Division photos that were taken and see what we can find out. 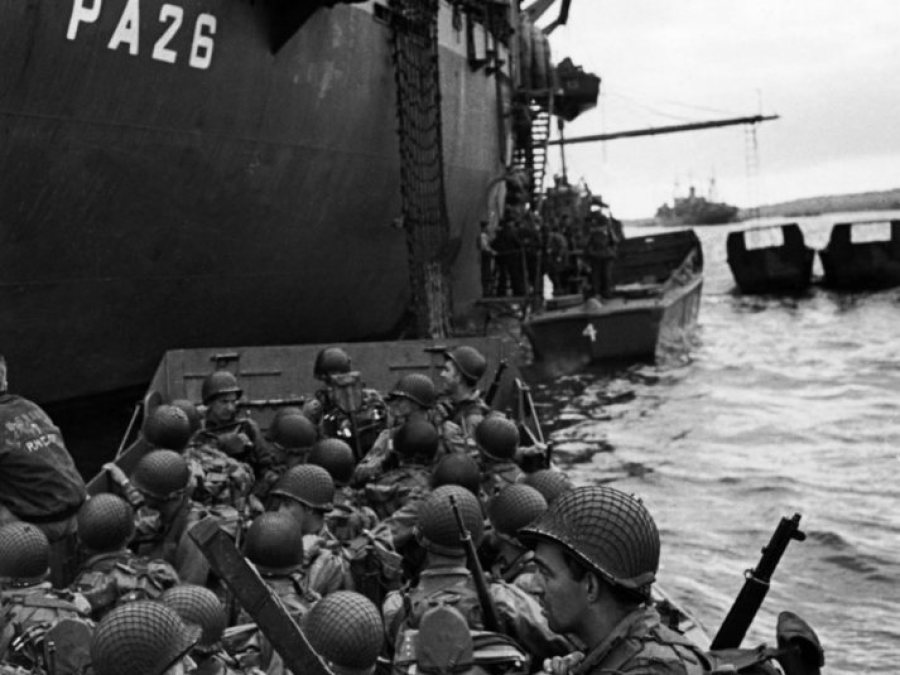 The theory we have is that the HQ boats boarded last and from what we can tell they didnt wear helmet scrim. 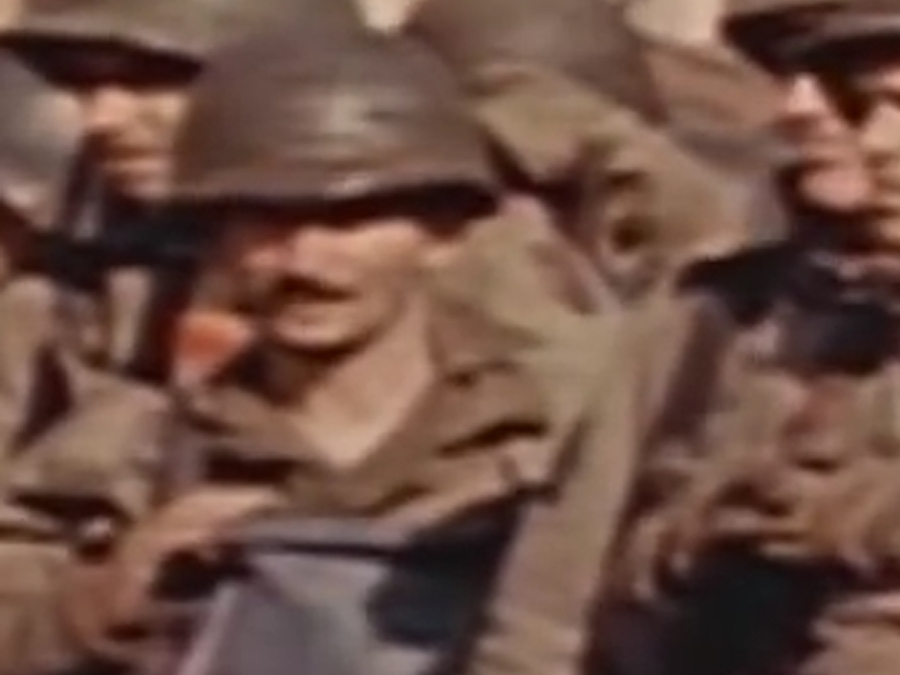 This enlarged section of a frame from the colour footage taken in Weymouth shows lots of GI's waiting at the dock. the 1st Division patch can be just about seen on one of the GI's. We think that these men are from 1st Btn 16th Division. 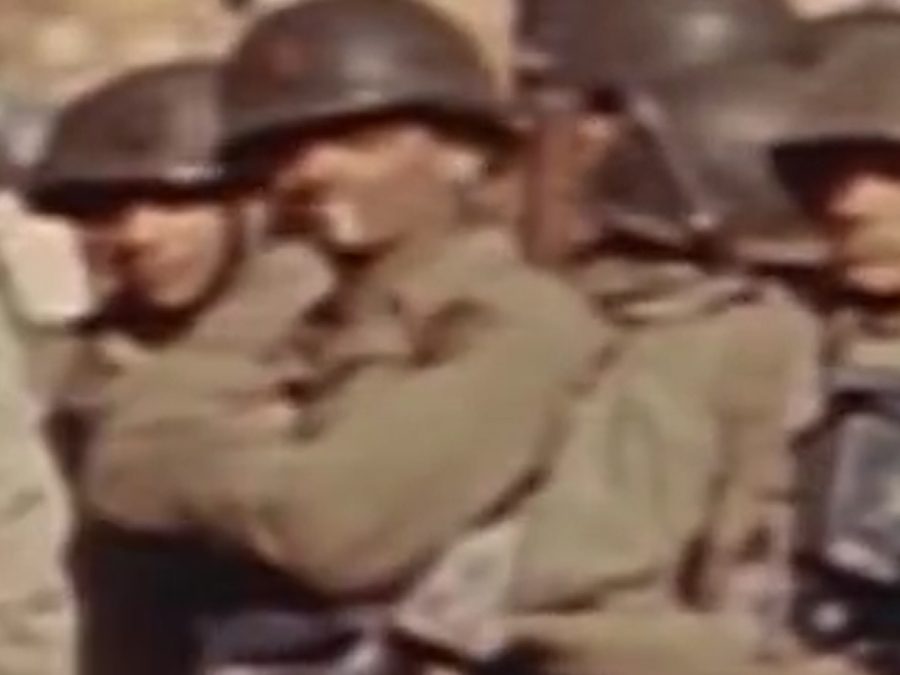 This GI's helmet looks like ie bears the 1st Div insignia. taken from the same clip as the picture left. 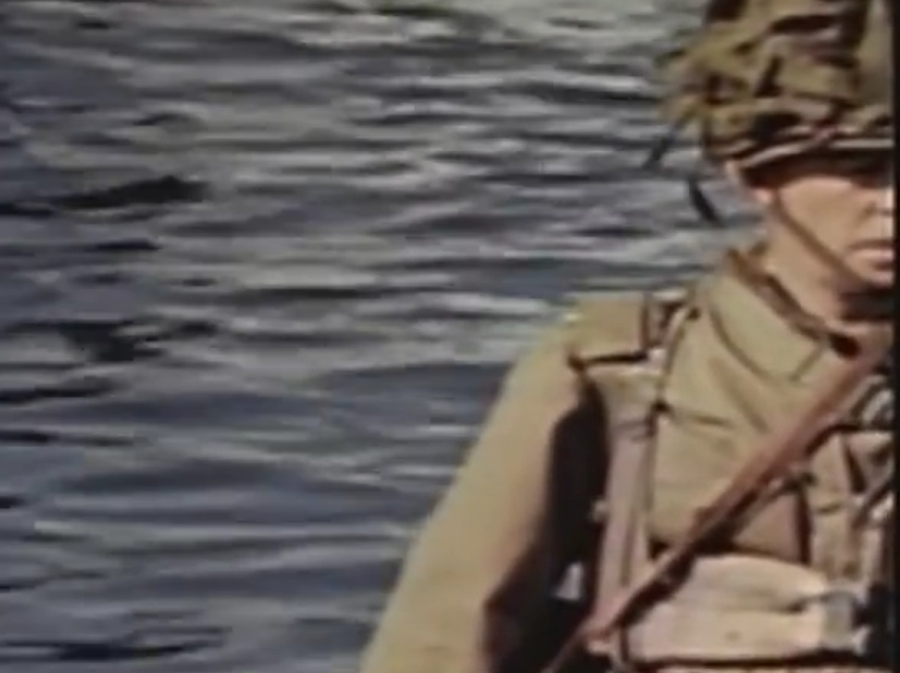 This Officer is seen in a film reel of what we think is 1st btn 16th Infantry boarding at portland, the same reel as the images above. This Officer appears to be the only one wearing scrim in his helmet though it is worth noting that this mans shoulder patch is never visable however the men he is watching boarding the landing craft are 1st Division GI's.

The great thing about this shot is it confirms that 2 colour scrim was used by the 1st Division and 29th. Apple Green and Brown scrim has been found at 29th position digs around St Lo. 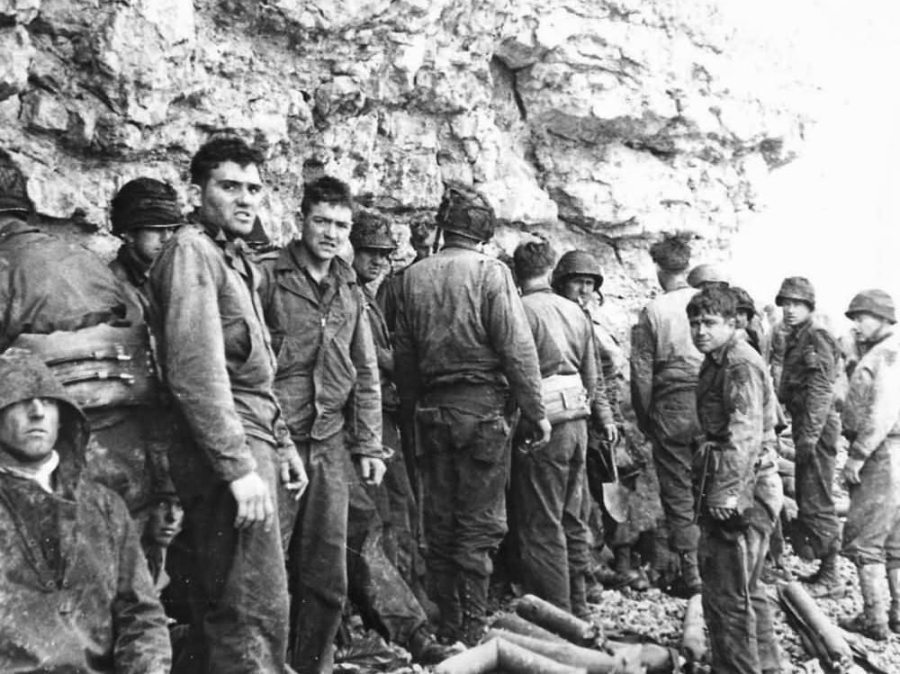 This photo shows 1st Division wounded on Omaha, you can almost make out 1st Div patched on the 2 men far right.

Again helmet scrim is common on most of the men in this photograph. 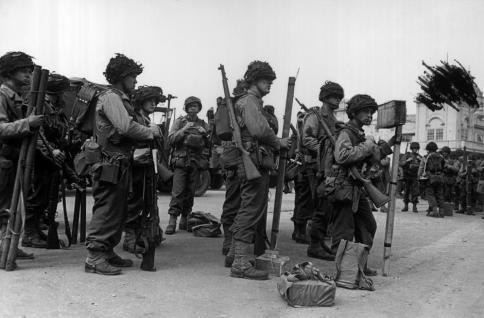 That brings us back to our photograph.

We know the picture was taken early as you can see by the long shadows on the floor. possible one of the first images Capa took of that day as the men boarded.

The men have the assault equipment and helmet scrim so we know they are first wave men.

Its safe to say they are not Rangers due to the uniforms being worn.

29th or 1st? very hard to tell as there is no definite patch or helmet insignia on show. The only thing swaying us in the case for them being 29th is the chin straps all being worn on the chin.

But lets look at some more images from that day. 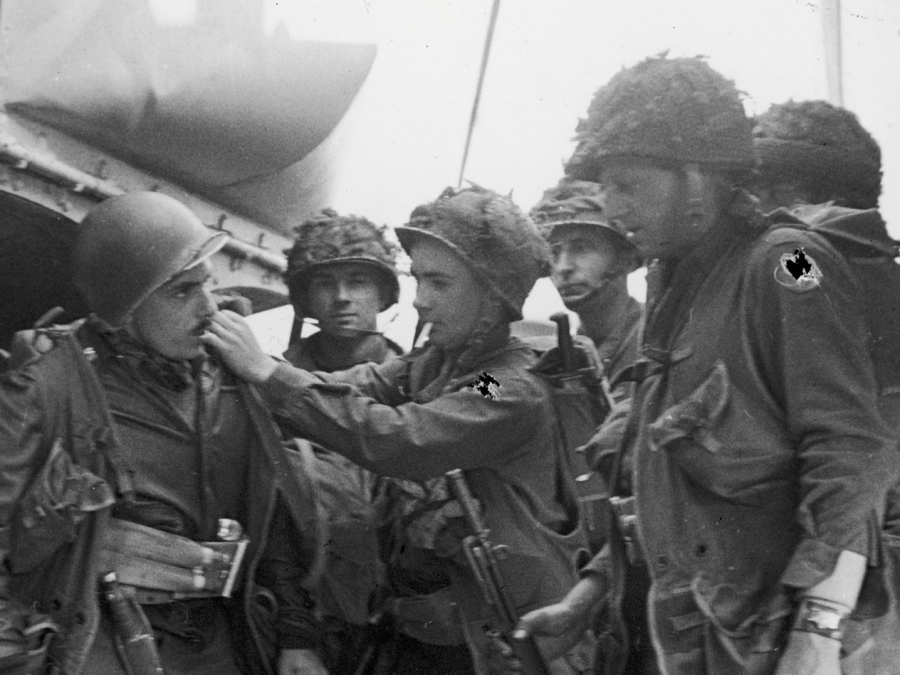 Bert Brandt is the photographer on the left of this picture, he is having an assault vest fitted by the GI's on board the USS Charles Carroll which carried 3rd Btn 29th Division. Brandt has scratched out the patches on the arms of the 2 GI's but if you look closely at the patch on the right you can just about see the yin yang showing. The men are all wearing assault equipment and I think its safe to say they are 3rd Btn. 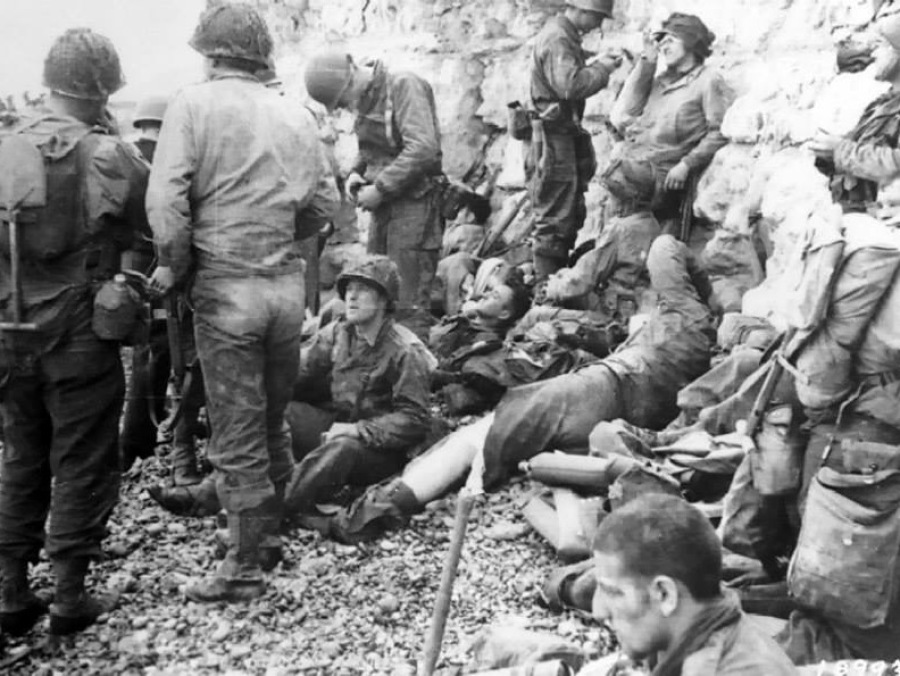 This image is taken East of St Moulins draw where 3rd btn 29th landed as well as the 16th Infantry Regiment 1st Division. It shows a mixture of injured men and medics treating them.

The GI standing at the back with his hand over his eye has a 29th patch on his 41 jacket. You can also see he has scrim in his helmet. 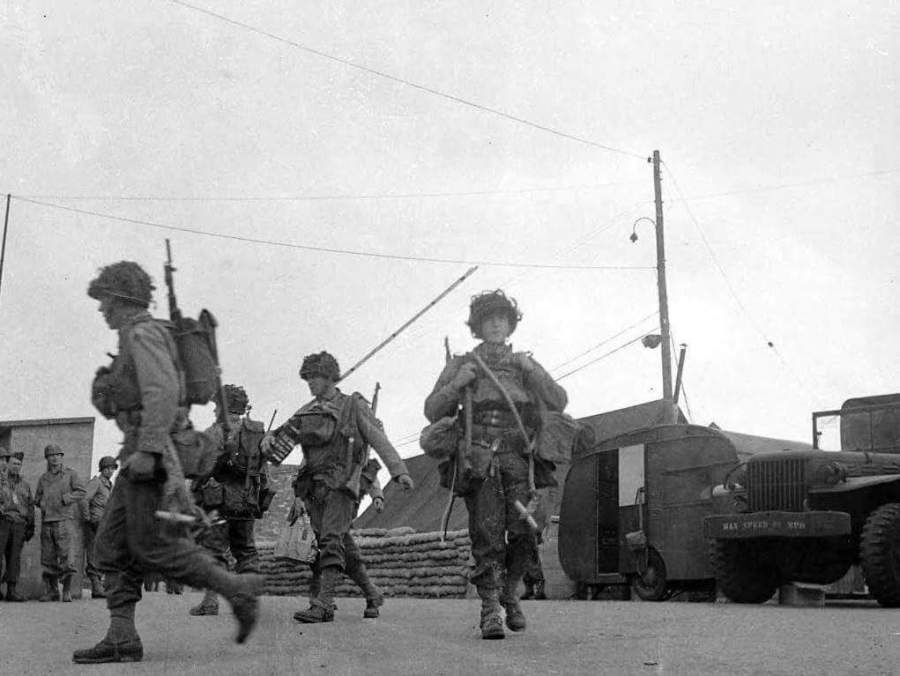 This picture taken at Portland shows an assault boat team marching towards the dock area to board.

You can see they have pole charges, ropes and pack charges. (these pack charges are in the sytle set out by the Assault Training Center and not in a haversack)

If you look at the GI on the left you can see the 29th patch on his arm.

From the evidence shown above it is my best guess that the men in the first picture are from the 116th Division. As to which battalion they are from its most likely they are 3rd btn as 1st and 2nd were probably allready aboard by the time the sun came up but there is no way of telling for sure.  The image was probably one of the first taken in the morning that day.

But lets look at some other GI's captured on film in Weymouth and Portland. 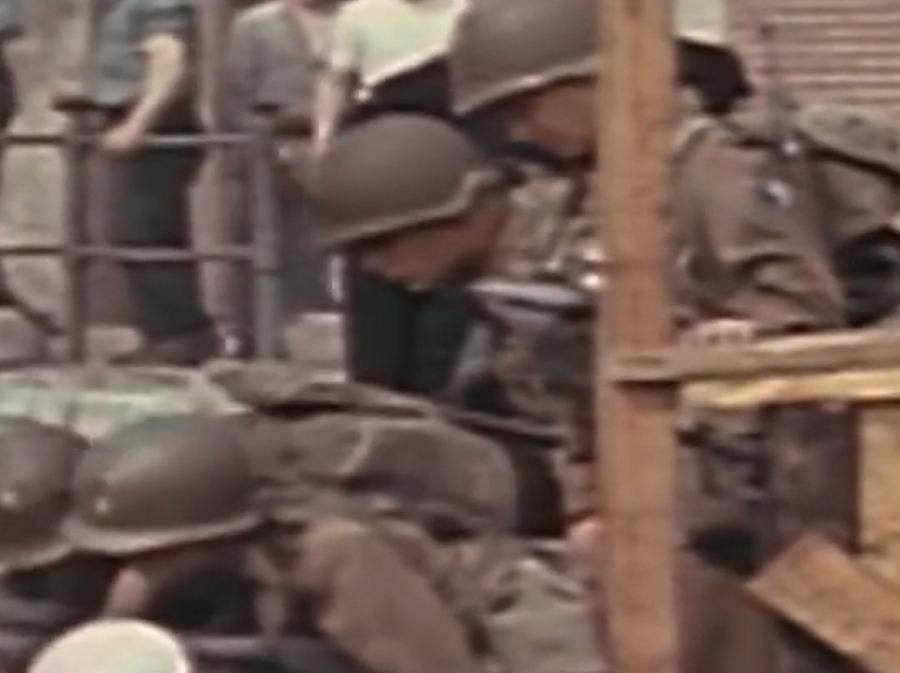 Theres no denying that these GI's are 29ers. The patch is clear as day and these men are not sporting any helmet nets.

They are wearing assault vests but there is no assault equipment seen. The film is in colour so they boarded later in the day. 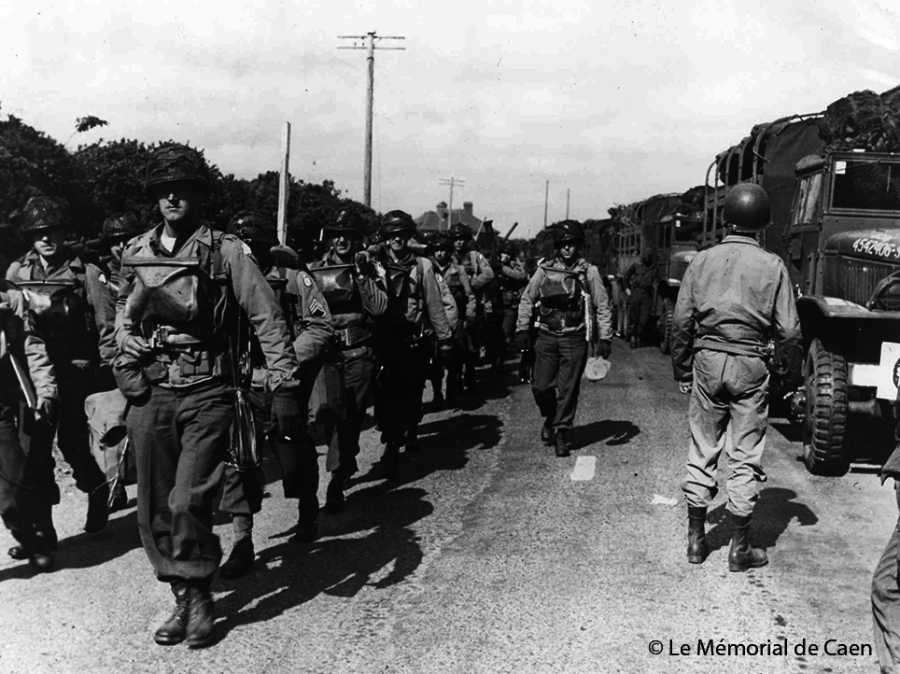 These GI's marching down a road in Weymouth are quite hard to identify. The scratched out patches appear to be round circles which would possibly be the round patch of the 29th Division however none of the men are wearin their chin straps...

They are wearing wool trousers and have scrim in their helmets, looks like the men at the back are carrying pole charges but its hard to tell.

The shadows are long so we know its an early shot. Its also hard to tell if there are any assault vests visable.