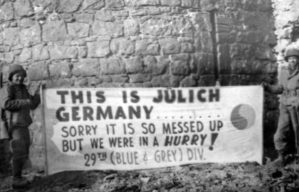 During the rest of the war the 29th Division clawed its way into western Germany. The men missed Hitler's Ardennes offensive, but by keeping up pressure on their own sector of the line freed other units to counterattack and defeat the Germans' last threat. In the spring the Blue and Grey finally broke through, capturing a number of cities and thousands of prisoners.

Munchen-Gladbach fell to the division on 1 March 1945 which then found itself supporting other American forces mopping up resistance in Germany's industrial heartland, the Ruhr "Pocket." This operation involved little combat as everyone realized that the war was about to end.

On 24 April the 116th became the first unit in the 29th Infantry Division to reach the Elbe River where the Americans halted to await their Russian allies advancing from the east. The first Soviet unit (5th Guards Cavalry Division) reached the 29th's sector on 2 May. The following day Brig. Gen. Sands, Division Artillery commander, crossed the river to greet them.

With Germany's surrender the men of the Blue and Grey moved west again to assume occupation duties in the region around the ancient city of Bremen and its port, Bremerhaven, where they remained until it was time to ship home. The first, departing on Christmas day 1945, included the divisional band, the 116th Infantry and the 111th Field Artillery aboard the S.S. LeJeune and John Schueitzer.

The Division was demobilizied and inactivated at Camp Kilmer, New Jersey, on 17th January 1946.