Five stretches of French coastline in Normandy were selected as the sites for the landings that the allies intended as the primary effort to defeat Hitler on the western front. One of these, codenamed "Omaha," became the responsibility of the Regular Army's 1st Infantry Division and the 29th on the morning of 6 June 1944.
The 116th Infantry received the mission of leading the division ashore, the only National Guard regiment to participate in the first wave on that historic day. The 16th Infantry of the 1st Division landed to their left and the 2d Ranger Battalion was assigned to capture the cliffs on their right. The "Stonewall Brigade" had responsibility for a section of beach 3,000 yards long but containing only two passages inland. The regiment had the task of opening both routes so that succeeding units could drive inland.

Planners counted on heavy naval and air bombardment to neutralize the defenses just before the boats carrying the first wave hit shore. Intelligence expected the Germans to use inferior quality troops along the coast and keep their best divisions inland to counterattack. On D-Day, however, fate had placed a crack unit on the cliffs overlooking Omaha as part of a training exercise. This development cost the 116th dearly.

The first assault wave of the 116th consisted of Companies A, G, F and E. They loaded into landing craft at 0400hrs. Difficulties began as soon as the small boats started towards shore and encountered large waves. At 0630hrs the first craft approached the beach and came under fire from German gunners. Some boats suffered direct hits or sank when near misses flooded them with seawater. Obstacles stopped others offshore and forced the men to wade in while exposed to fire, often at locations far from their assigned sectors.

Company A was hit hardest. They suffered more losses getting ashore than any other unit of the 116th. Forty-six guardsmen from Bedford were in the company, but only twenty-three survived that day. Within ten minutes every officer in the company was a casualty and the survivors found themselves pinned down by Germans shooting from the tops of nearby cliffs. The other three companies in the first assault group fared somewhat better, in part because many of their boats were pushed off course or because smoke from fires started by naval gunfire hid them from the defenders.

The second wave started landing troops at 0700hrs. These companies encountered many of the same problems and also became pinned down. Maj. Sidney Bingham, commander of the 2nd Battalion, finally organized men in the center of the zone and captured a large stone house dominating the beach near Les Moulins draw, but heavy fire again blocked further movement.

The third wave came ashore twenty minutes later and benefited from the sacrifices of those who had gone before. This element, mostly from the 1st and 3d Battalions and the attached 5th Ranger Battalion, finally fought their way to the crest of the bluff between the beach's two draws and, led by Company C, became the first element of the 29th Infantry Division to penetrate the first zone of defenses. Shortly thereafter a second force punched through further east. Ten minutes after the third wave landed the last elements of the regiment started reaching shore, including Col. Charles Canham who remained in command despite a painful wound.

The 116th's artillery support on D-Day was supposed to come from the dozen howitzers of the 111th Field Artillery Battalion. Unfortunately, all of the amphibious trucks (DUKWs) transporting the guns to the beach either swamped or suffered hits. The dazed survivors struggled ashore near Les Moulins at 8:30 and were told by Lt. Col. Thornton Mullins "To Hell with our artillery mission, we're infantrymen now!" A sniper soon killed the colonel, but his troops assisted their fellow Virginians in the drive inland.

By nightfall American forces controlled the key terrain at Omaha and plus the cliffs on the right. The drive for their next objective began, the communications and traffic crossroads in the city of St. Lo. The Germans tenaciously defended and forced the Americans to fight for each hedgerow. During this combat Tech. Sgt. Frank Peregory of Charlottesville's Company K, 116th Infantry, earned his Medal of Honor by capturing an enemy strongpoint single-handed. Unfortunately, he was killed a few days later. 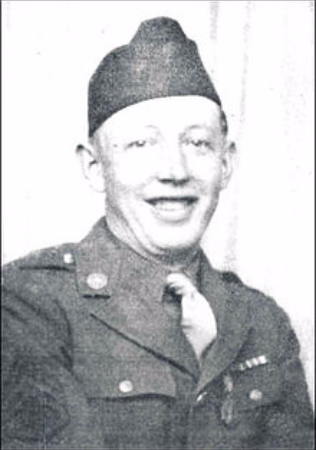 On 8 June 1944, the 3rd Battalion of the 116th Infantry was advancing on the strongly held German defenses at Grandcamp-Maisy, France, when the leading elements were suddenly halted by decimating machine gun fire from a firmly entrenched enemy force on the high ground overlooking the town.

After numerous attempts to neutralize the enemy position by supporting artillery and tank fire had proved ineffective, T/Sgt. Peregory, on his own initiative, advanced up the hill under withering fire, and worked his way to the crest where he discovered an entrenchment leading to the main enemy fortifications 200 yards away.

Without hesitating, he leaped into the trench and moved toward the emplacement. Encountering a squad of enemy riflemen, he fearlessly attacked them with hand grenades and bayonet, killed 8 and forced 3 to surrender. Continuing along the trench, he single-handedly forced the surrender of 32 more riflemen, captured the machine gunners, and opened the way for the leading elements of the battalion to advance and secure its objective.

The extraordinary gallantry and aggressiveness displayed by T/Sgt. Peregory are exemplary of the highest tradition of the armed forces.